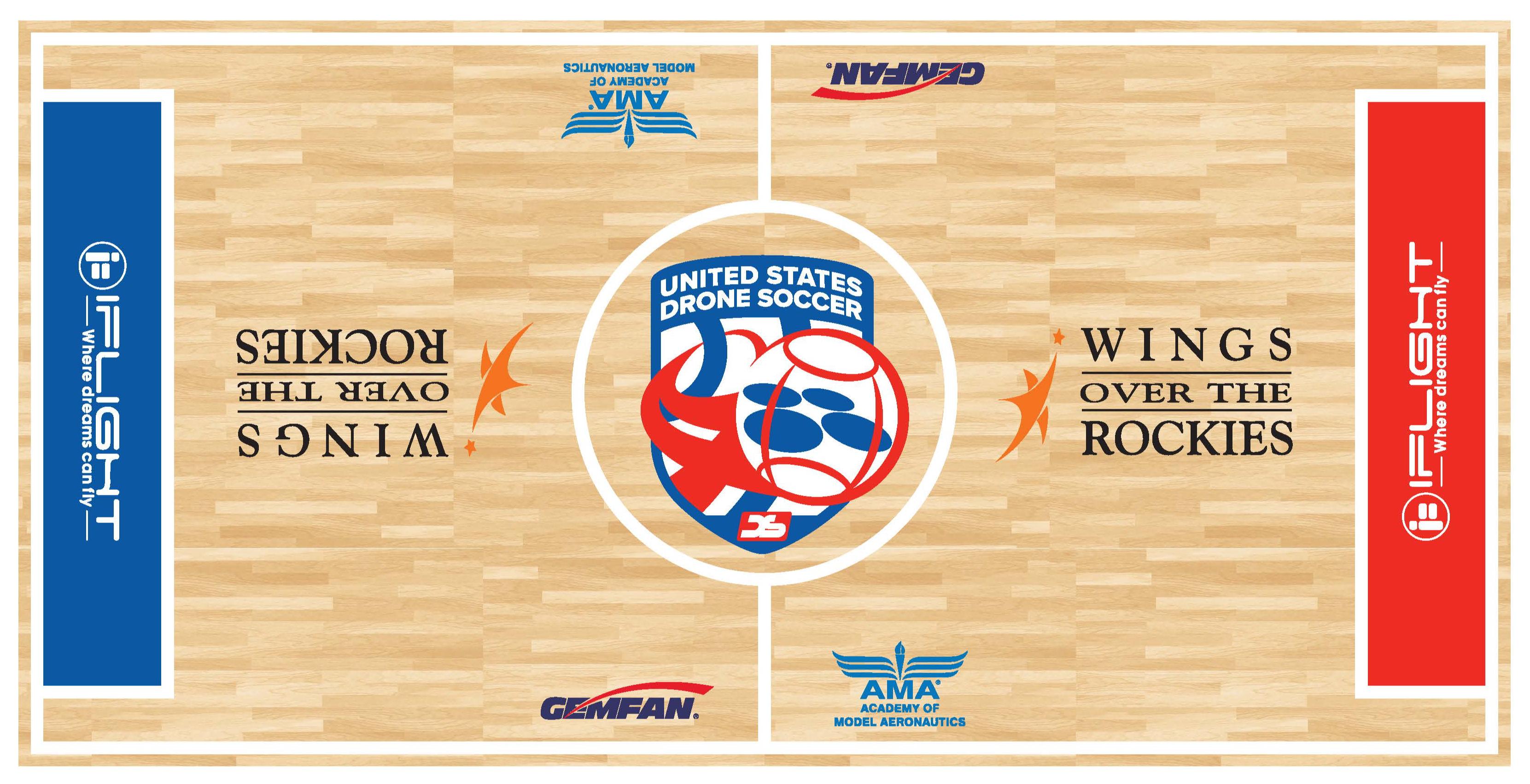 We comply with all provisions of the World Air Sports Federation (FAI) rulesets for international Drone Soccer. There are two recognized size classes including the larger 40cm and the smaller 20cm drones. The smaller size of the 20cm class arena (10x20ft) can easily fit in any middle or high school gymnasium. We anticipate the larger 40cm drone class will be utilized in by collegiate teams who will engineer their own drone designs for competition.

Drone Soccer Matches are fast-paced contests where each team rams and block each other to prevent the opposing team's designated striker from scoring.

Drone Soccer can be played by teams of equal size (3v3, 4v4, or 5v5). Each team roster must be coed and may have a maximum of ten players. The roster of active players must remain coed over the course of the match.

Broken propeller blades can depart the arena at high speeds. Players and referees should wear glasses or protective eyewear when in the vicinity of the arena during active gameplay.

Each Match consists of 3 Sets. The duration of each set is 3 minutes. A 3-5 minute repair countdown between Sets allows for battery exchange, aircraft repair, and substitutions. Thirty minutes are allotted for each Match.

The winner of each Match is determined by the best of three Sets. The team that scores the most points in the allotted time will be awarded that Set. Teams will play all three Sets for ranking purposes. In the event of a tied Set resulting in a tied Match, the winner of the Match will be decided by Sudden Death in extra time (the first to score wins).

Teams are responsible for ensuring their drones are ready to fly, and that they have enough charged batteries (four per player) before each Match.

All drones should be placed on the staging table with batteries strapped on, but not connected. The referee will enter the arena and place the drones in the starting zone. The referee will call “Radios On” to remind pilots to ensure that their radios are ready.

At the starting signal, pilots lift off and begin play.

Misconduct - Players, coaches, and spectators must exhibit respectful conduct at all times. Officials may remove participants from the Match or Tournament for infractions or violations of the Code of Conduct.

Controlled Flight - Drones must be flown under control to the best of a player's ability. Reckless  flight that intentionally causes damage may result in penalties and/or removal from the game. Damaged or disabled drones should be immediately disarmed to prevent further damage.

Interference - Only the referee can physically interact with drones within the Arena. No player, coach, or spectator may interact with a drone through the arena netting.

Early Start - Players will arm but remain on the ground until the start signal begins the Set.

Offsides - After a successful goal, the striker and all teammates must retreat back across the centerline before attacking again. No point will be awarded until all active teammates have all cleared the attack zone. Disabled drones are not counted.

Direction of Flight - The striker can not fly through the other team’s goal from the back. Defenders may not hover within the goal, or fly through the goal in the reverse direction. All drones who enter a goal must fly out and around to return to play.

For a violation of the above rules, a Penalty Shot may be awarded by the Referee.

Players must weigh the risk of damage with how aggressively they fly. A damaged drone must be immediately disarmed and that team will fly shorthanded for the remainder of the Set.

If a striker is disabled:

Upside Down or Stuck Drone

Drones who are stuck upside down must utilize “turtle mode” to flip over, or have a teammate bump assist to roll the drone to upright for flight.

If a drone is stuck against the arena, notify the referee who will free it. Do not interact with a drone through the net. The referee may choose to pause the game to assist a stuck drone.